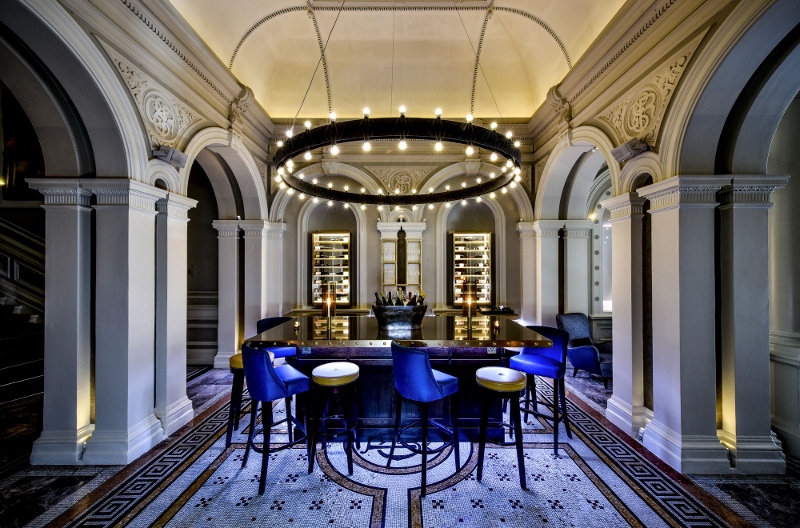 Diverse, eclectic, buzzing and creative are the words I’d use to describe the multi-faceted and historic, yet urban City of London.

With its mix of modern star architecture and buildings deeply rooted in history The City surely is a neighbourhood worth discovering. At the same time it is a popular hub for multi-nationals and London’s primary financial district. This makes the Andaz London Liverpool Street an ideal address for business and leisure travellers alike. Home to one of the oldest pubs as well as a great variety of restaurants and bars in terms of interior styles and cuisine, it should be on everyone’s list when in this part of town. 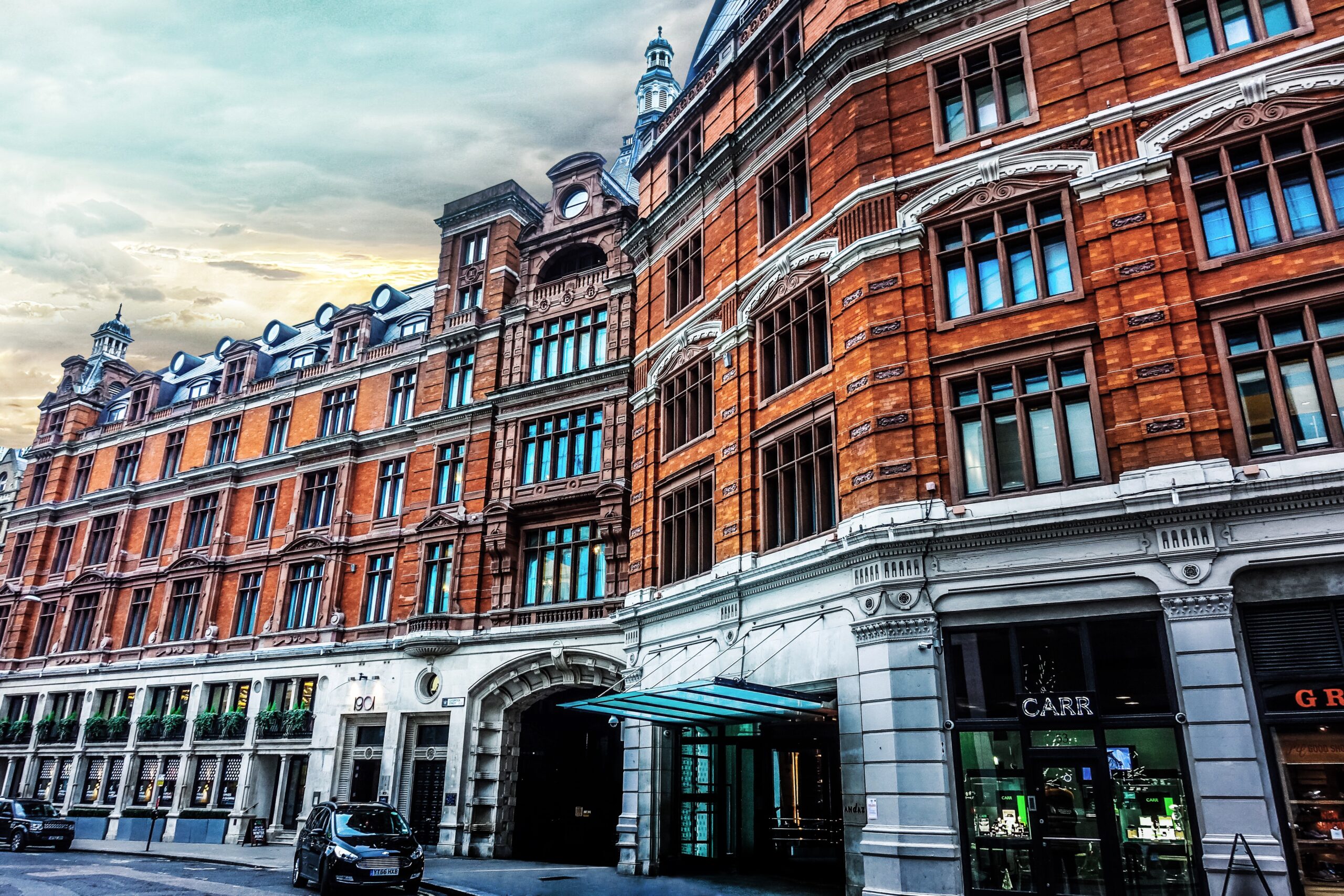 The Andaz London Liverpool Street, formerly the Great Eastern Hotel, is a 5-star boutique hotel and has got a long-standing history of its own. The hotel first opened its doors in 1884 by the Great Eastern Railway Company to accommodate the increasing number of travelers using this then modern way of transport. The luxury hotel even had its own train track for their deliveries, which included a daily supply of fresh sea water, so that their wealthy customers could enjoy a salt water bath. Sadly the hotel was neglected over the years and eventually closed in 1996. Four years later, after a massive renovation, the hotel reopened its doors revealing its true beauty mixing authentic Victorian architecture with modern eclectic interiors. 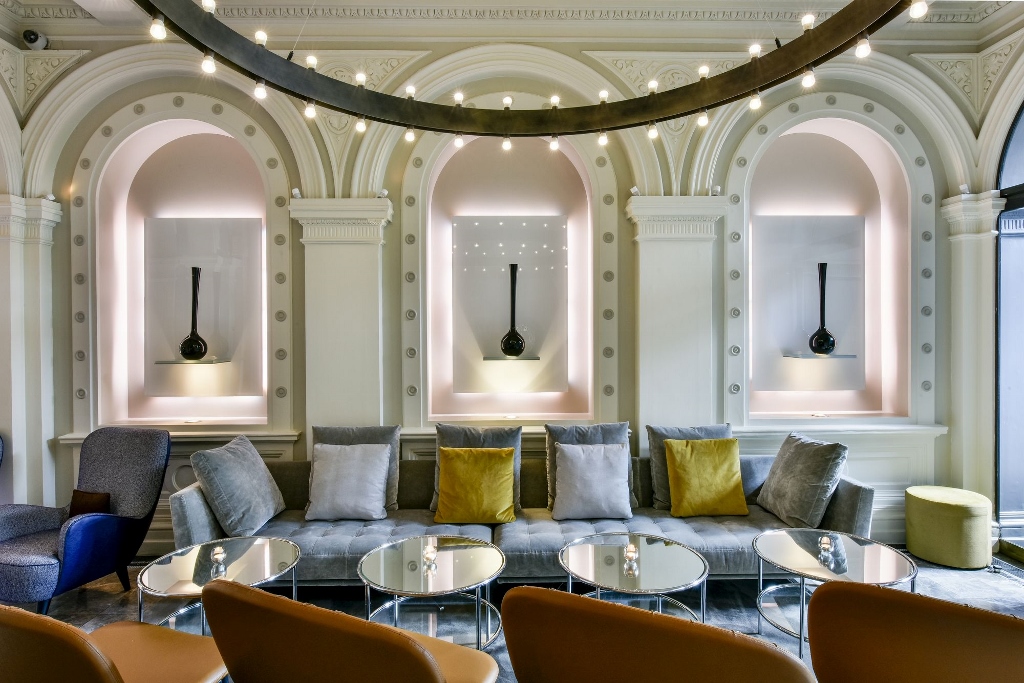 In 2006 the hotel once again changed ownership and became the first Andaz hotel, the design brand of Hyatt Hotels & Resorts. The brand Andaz defines itself by ‘personal style’, however, I would take it a step further and describe it as ‘Hyatt standards with a touch of quirkiness, lots of individuality and a true sense of place.’ 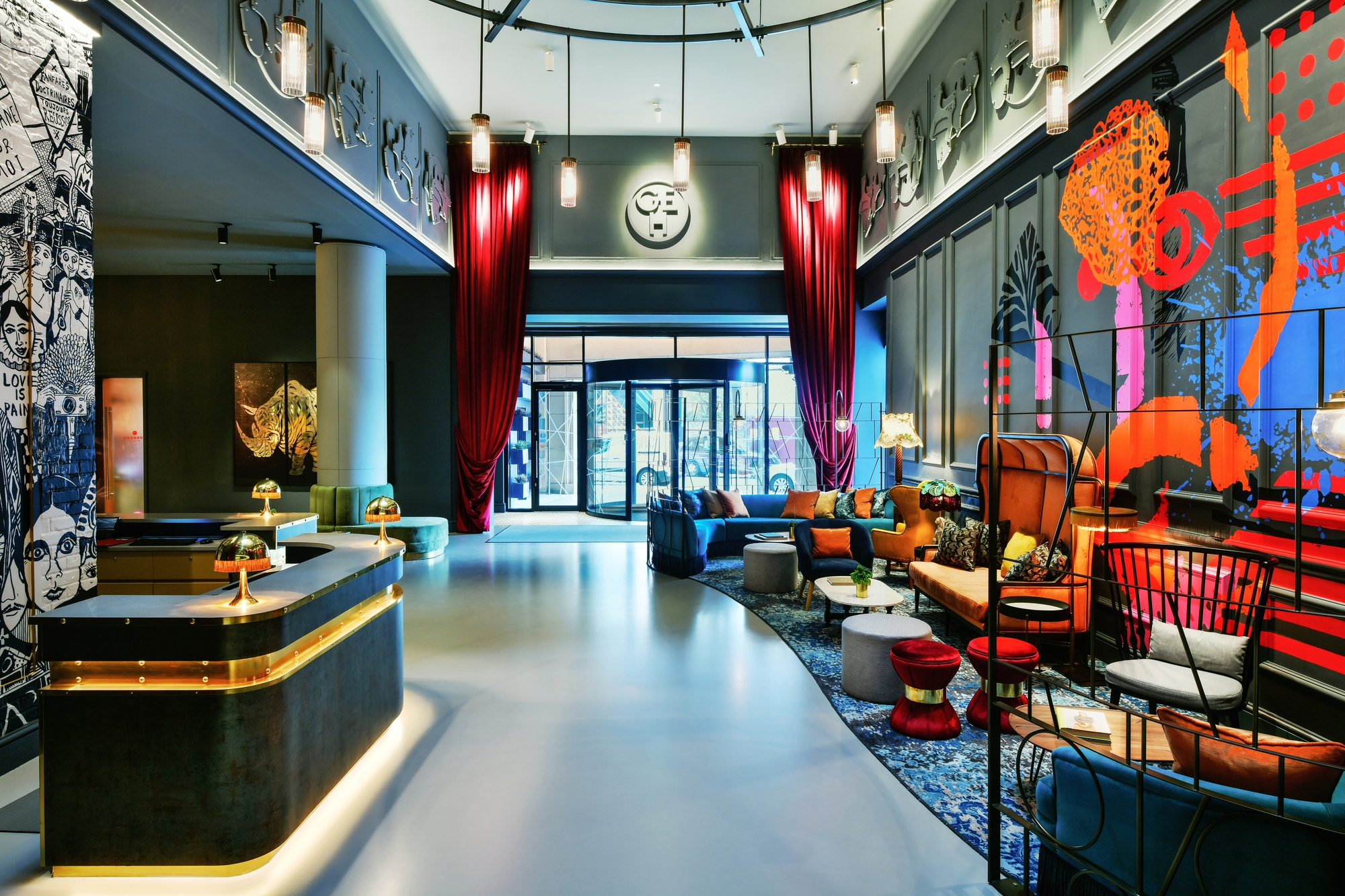 The quirky hotel lounge, where history meets graffiti is a true reflection of this hip London neighbourhood.

Only a few steps away from the hustle and bustle of Liverpool Street Station, it feels like stepping back in time into a haven of peace when you enter the hotel. The lobby area consists of a lounge featuring a 10m tall ceiling with a rim displaying tools and parts of railway construction as well as the original logo of the Great Eastern Hotel. Graffiti and quirky wallpaper lines the walls creating a very artsy East London feel to the space. The enormous full height ruby red velvet curtains add a touch of drama to the lounge. 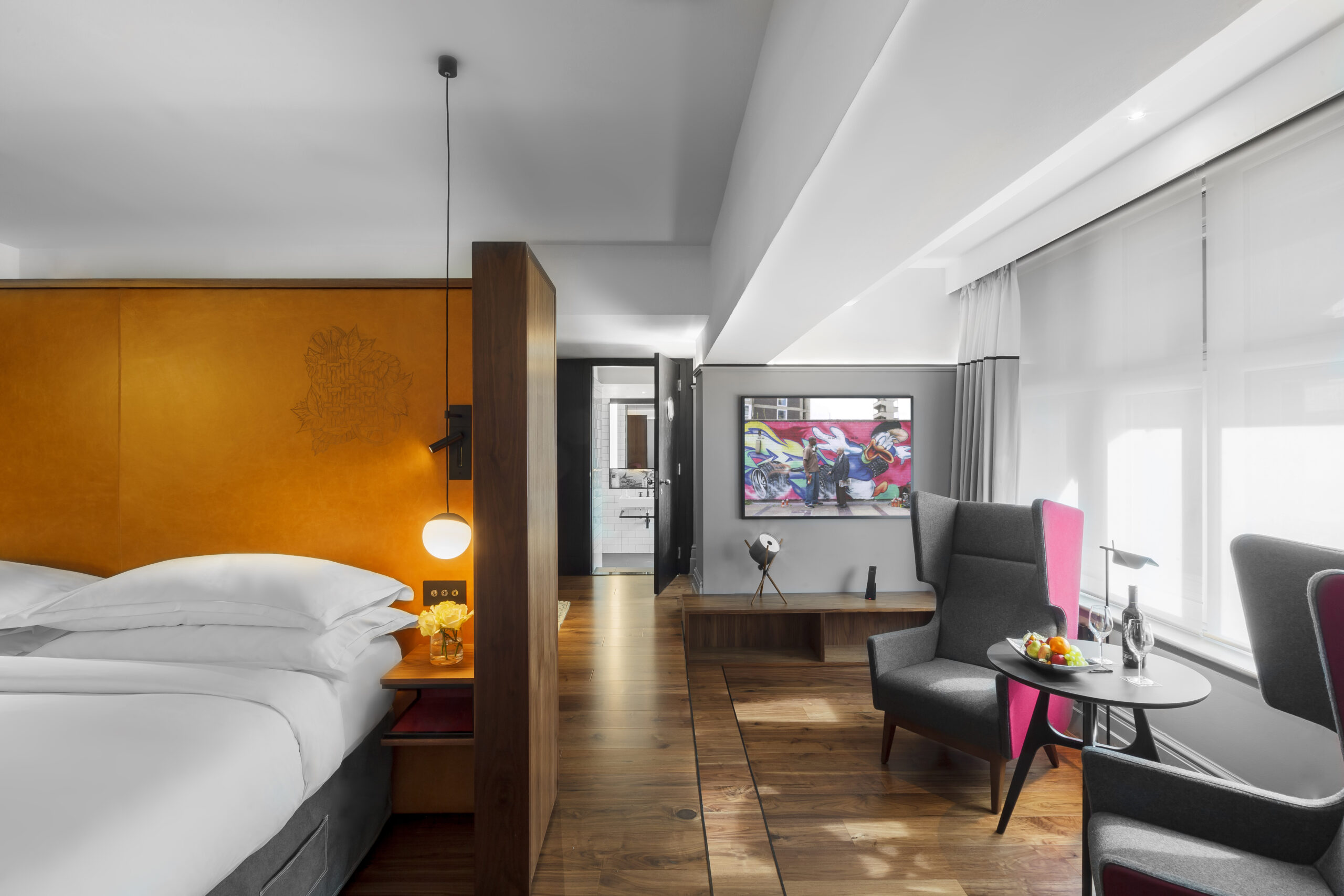 The bedrooms feature an eclectic mix of old and new features as well as some original artwork.

The 267 rooms and suites feature a minimalist décor mostly held in black, white and red as well as touches of wood. Many rooms boast splendid city views overlooking the roofs of old terraced houses contrasted by modern architecture such as The Gherkin. The Deluxe rooms offer a generous sitting area, larger than many London flats. 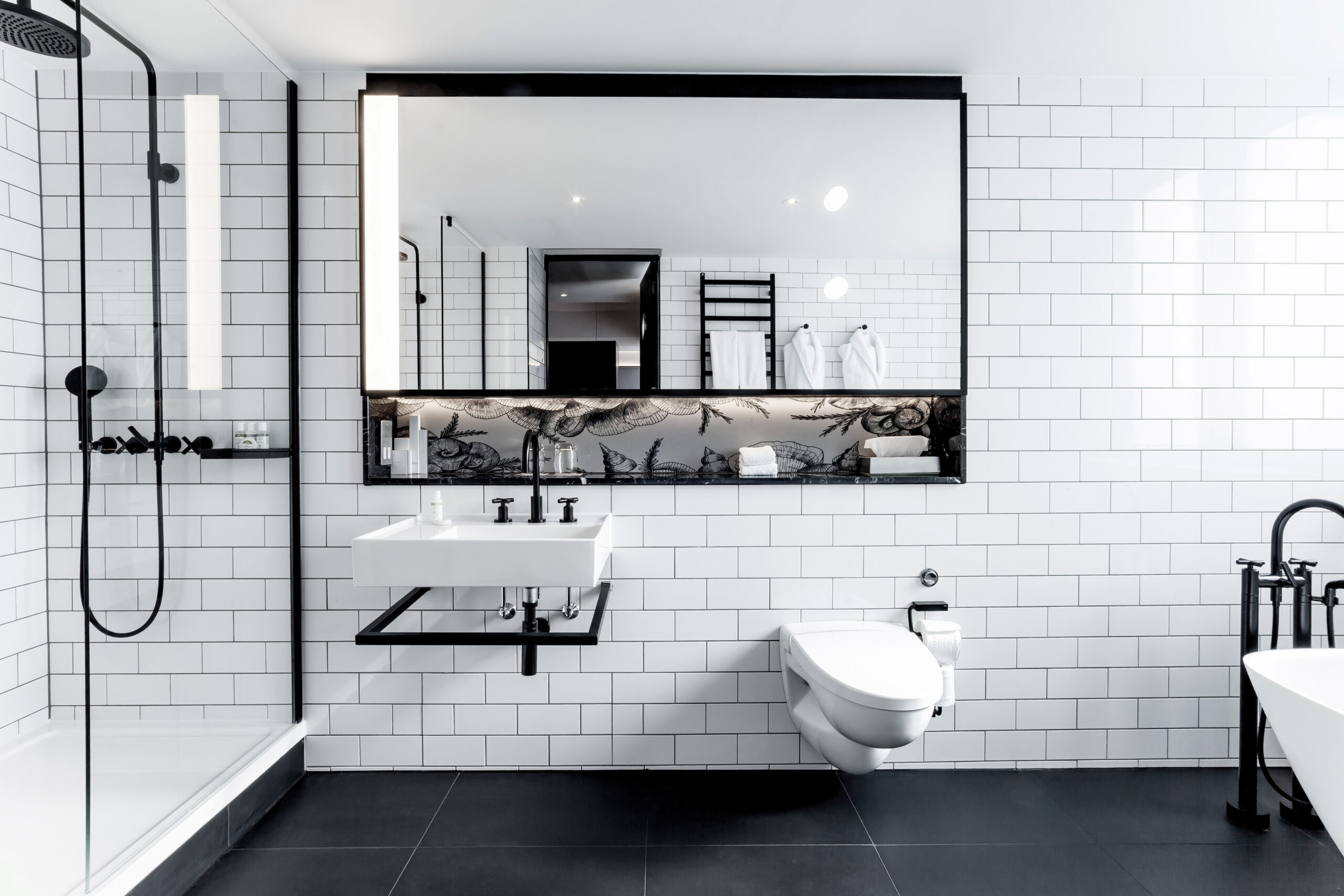 The metro tiles and free standing bathtub add a traditional touch to the black and white bathrooms.

I was particularly fond of the tall ceiling, the generous size of the bedroom and the huge windows. All rooms offer a comfortable bathroom with tub and shower. The black and white colour scheme featuring the famous London metro tiles and traditional style British taps add a touch of nostalgia to this modern bathroom. 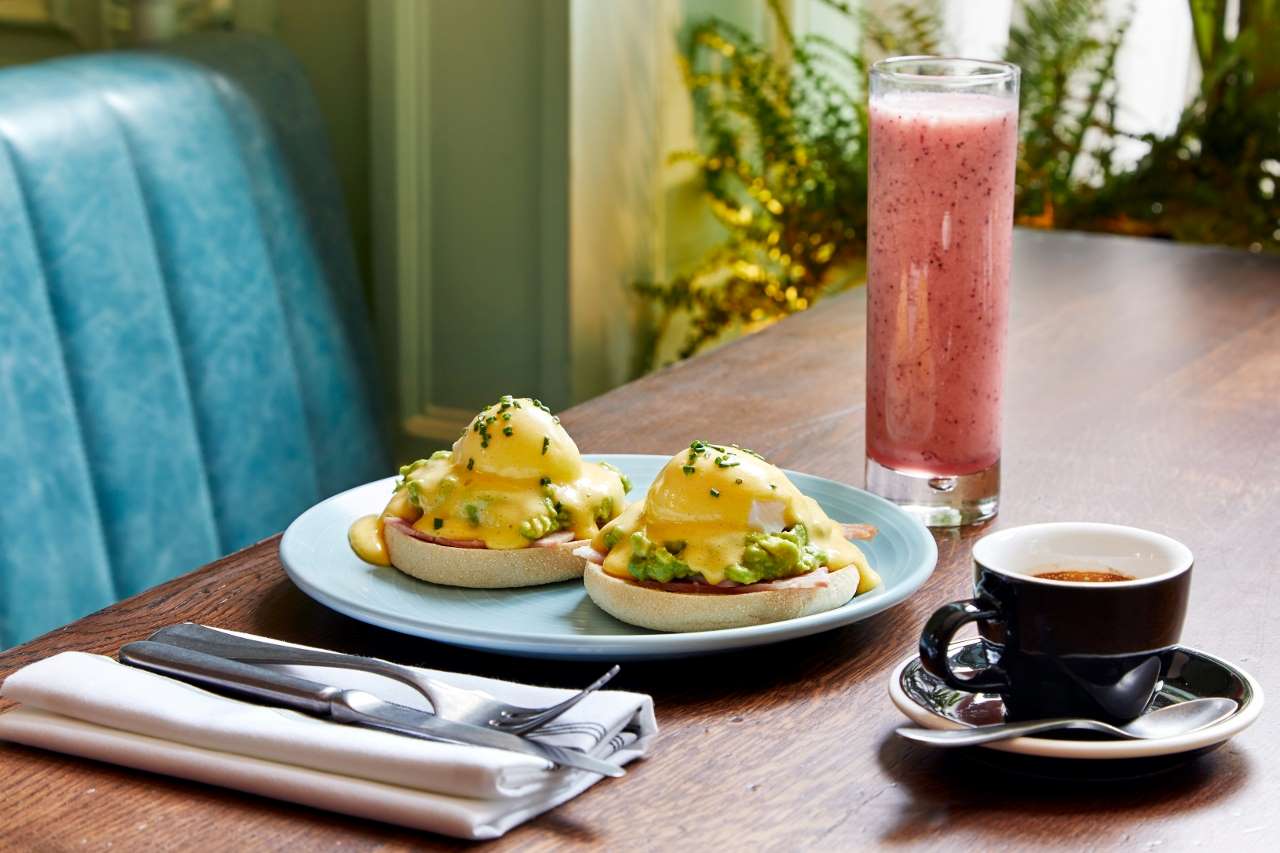 There’s nothing like a hearty English breakfast in style to start the day.

Lacking a stomach or two, I ‘only’ got to experience 2 of the 5 outlets that form part of the hotel. Whether it’s for the sumptuous breakfast buffet, traditional English afternoon tea, casual or fine dining, guests are guaranteed a versatile and sophisticated culinary experience. As for me, I surely felt like a queen sipping on my cappuccino and smoothie and enjoying my poached eggs… 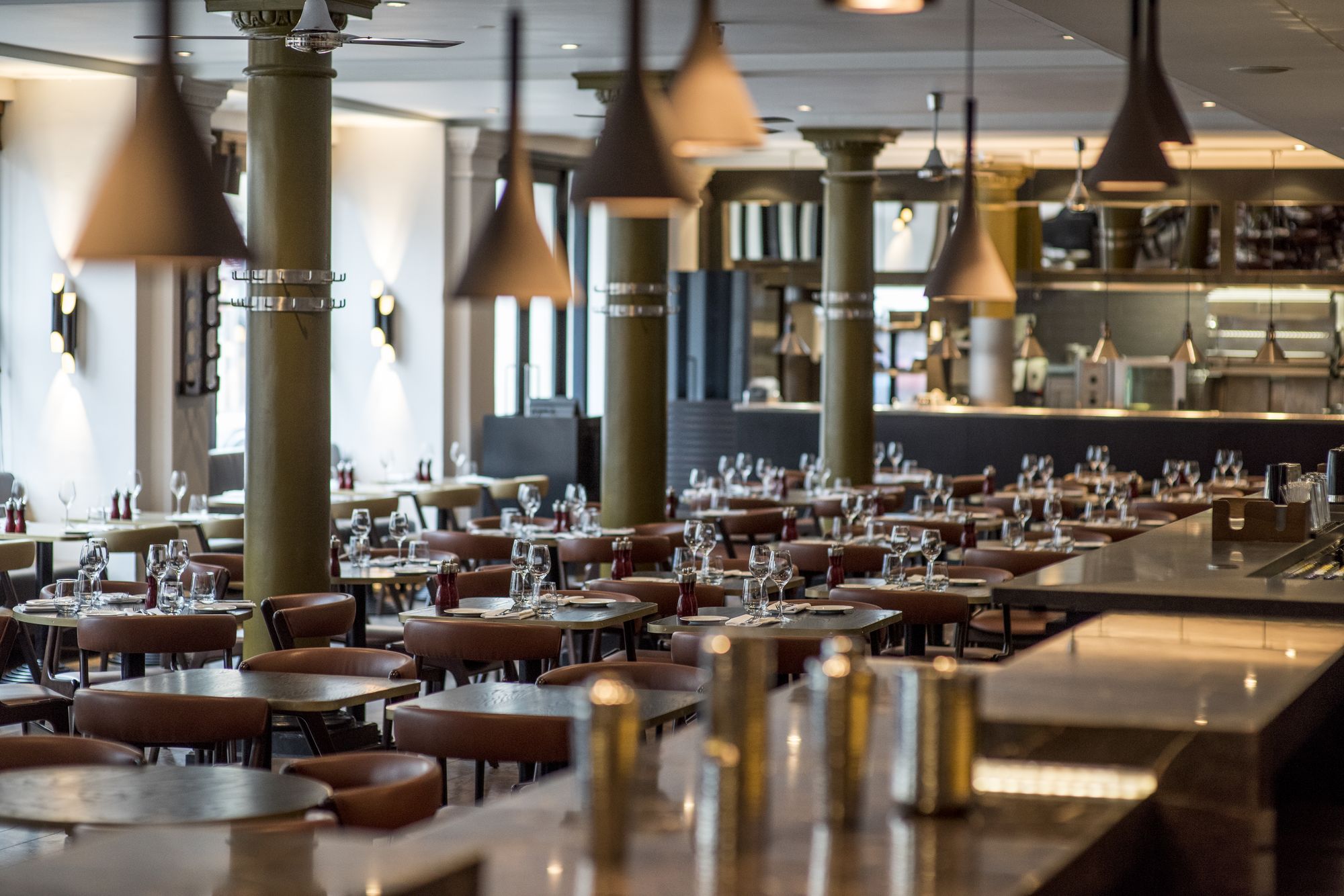 Eastway Brasserie offers breakfast, lunch and dinner in a relaxed ambiance with bistro style cuisine and décor and an open kitchen. The restaurant is also popular with the local office crowd and I now know why…

The historic Lady Abercorn’s Pub (formerly named George Pub) is one of the oldest pubs in the City of London featuring some impressive oak panelled walls and a remarkable Victorian coffered ceiling. It serves traditional pub food and has got an oversized plasma screen TV welcoming local and visiting sports fans. 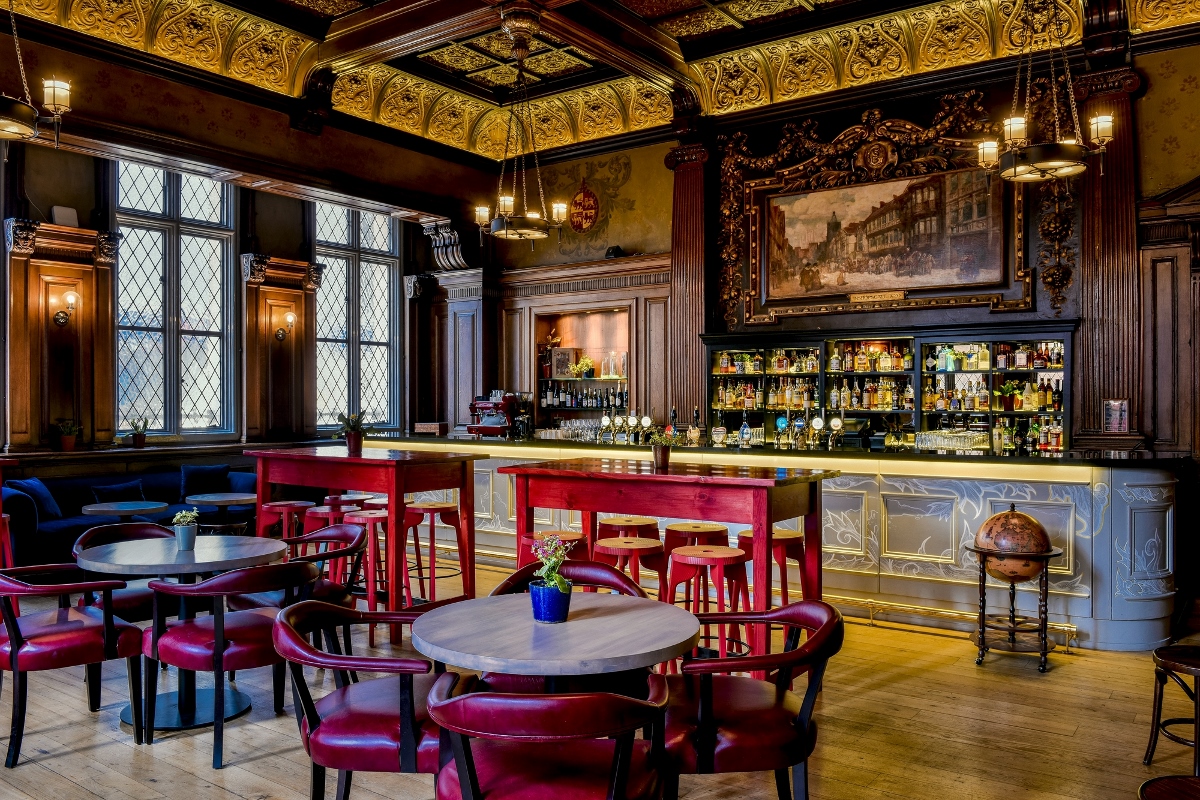 As one of the oldest pubs in London, Lady’s Abercorn’s Pub offers a great ambiance and is a must-visit when in this part of town.

Rake’s Bar successfully blends the traditional architecture of the building with contemporary interiors. The elegant space certainly sets the mood to enjoy a drink in style and get lost in conversation… 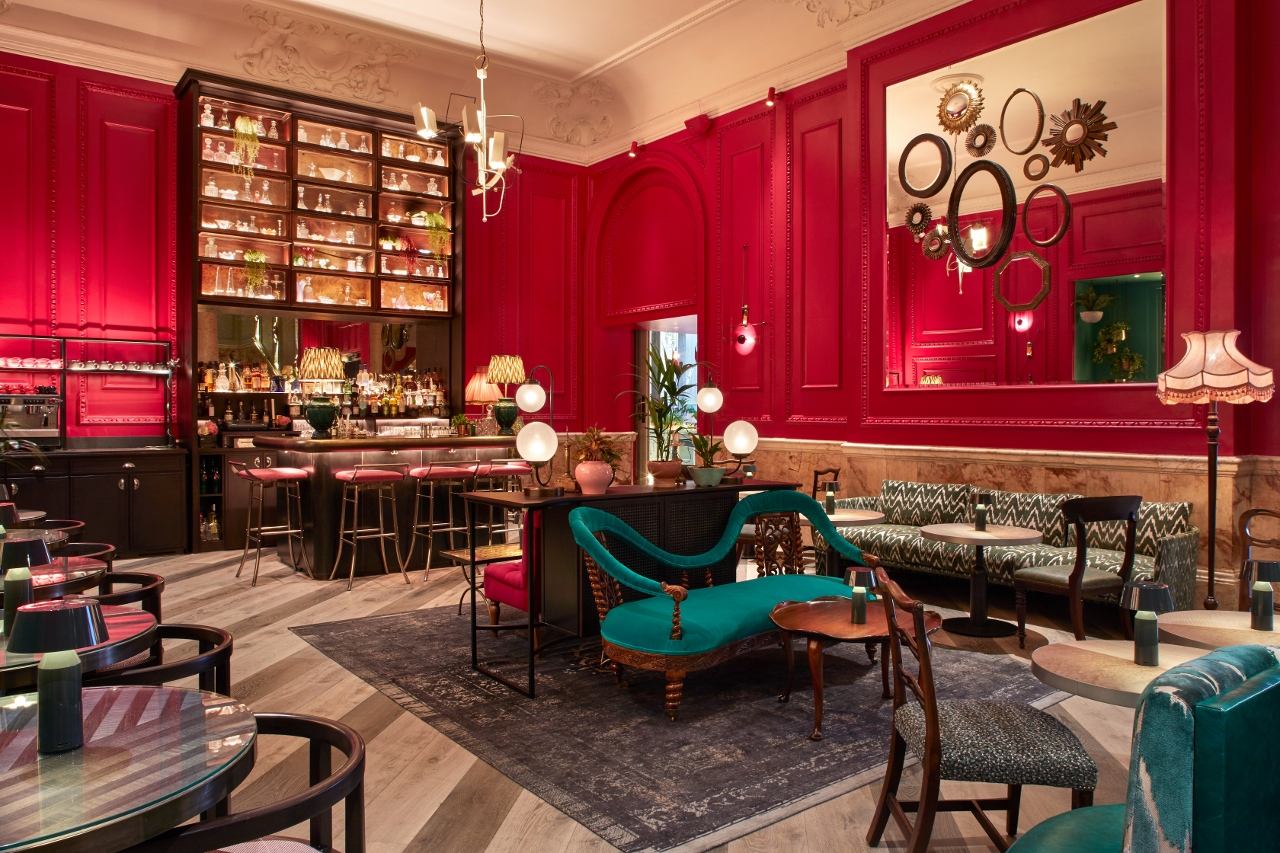 The bold colour scheme of the Rake’s Bar is sure to create a lively ambiance.

Then, there is the temple! Yes, you heard right! During the renovations in the year 2000, engineers noticed discrepancies from the original blueprints and much like in a fairy tale, discovered the most magnificent Masonic Temple hidden behind a wall. The lavishly decorated ‘Grecian Temple’ was built in 1912. It is fitted out with some of the most exclusive Italian marble, checkerboard floor tiles, mahogany chairs, bronze candelabras, a blazed golden ceiling star and a massive intricately carved throne. Legend has it that the infamous Jack the Ripper used to be one of the members attending the rites at the temple back in the days… However, today the space is popular for weddings and other formal events. 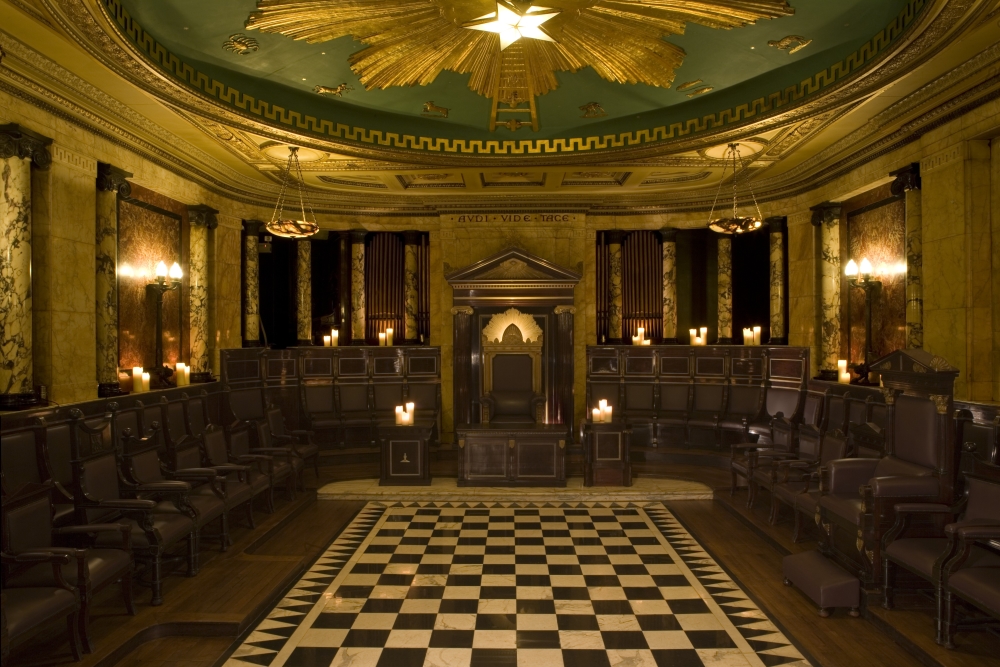 As I was admiring the Temple at the Andaz, I couldn’t help but wonder about the many stories this room must hold…

To complete your stay at the Andaz London Liverpool Street, you can either get moving in the Fitness room after a long day of meetings or relax those sore feet after walking the busy streets of The City in the steam room…

Note: This blog post was created in collaboration with the hotel (sponsored press visit).

Ambiance lighting really adds a touch of magic to

One of the greatest rewards of working as an inter

Loving the 'crackled' look of these ceramics. Piec

“It’s the details that create the wow”. Work

As I always say: “It’s the details that create

This website uses cookies to improve your experience while you navigate through the website. Out of these, the cookies that are categorized as necessary are stored on your browser as they are essential for the working of basic functionalities of the website. We also use third-party cookies that help us analyze and understand how you use this website. These cookies will be stored in your browser only with your consent. You also have the option to opt-out of these cookies. But opting out of some of these cookies may affect your browsing experience.
Necessary Always Enabled

Performance cookies are used to understand and analyze the key performance indexes of the website which helps in delivering a better user experience for the visitors.

Analytical cookies are used to understand how visitors interact with the website. These cookies help provide information on metrics the number of visitors, bounce rate, traffic source, etc.

Advertisement cookies are used to provide visitors with relevant ads and marketing campaigns. These cookies track visitors across websites and collect information to provide customized ads.

Other uncategorized cookies are those that are being analyzed and have not been classified into a category as yet.