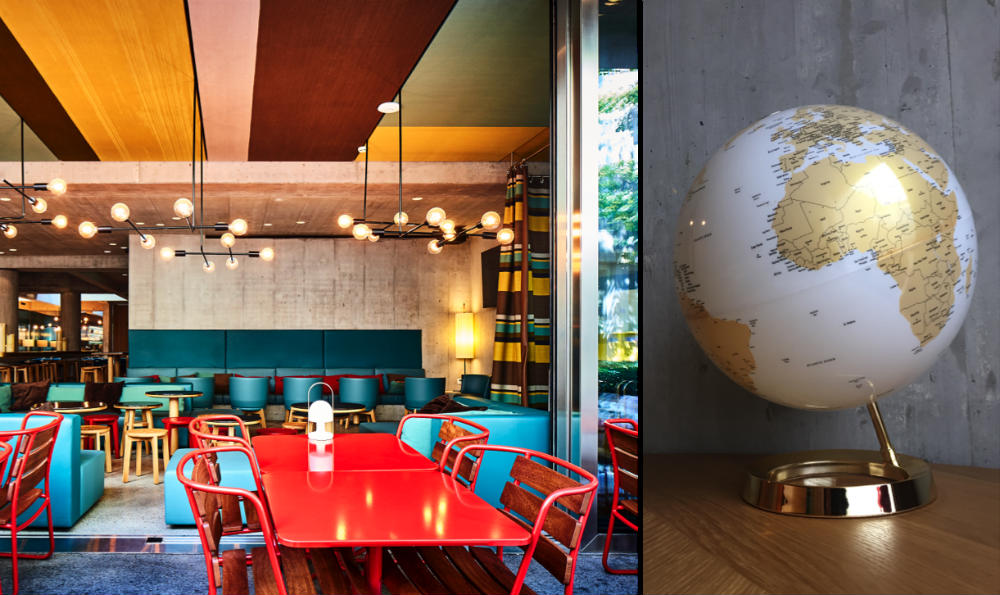 Today we live in a society, where terms such as ‘digital nomad’ or ‘Citizen of the World’ are commonplace.

If you fall into one of these categories or consider yourself someone with a global mindset, then the Nomad is just the place for you. It’s a place where hip and trendy is more than just a style, but also a way of life.

Travel is an integral part of human history. The early Homo Sapiens, our ancestors, lived a nomadic lifestyle until they invented agriculture. This new form of life and the invention of the wheel and the sailboat in return sparked new ways of travel, such as pilgrimages, crusades, trading voyages and colonisation. In the mid 17th century the so called «Grand Tour» became popular amongst aristocratic young men in England, who travelled to Europe to learn about the Ancient civilizations. Travel was initially an activity reserved for the wealthy, but during the industrial revolution and in particular with the invention of the railroad, travel was made more accessible to the masses. In 1841 a man named Thomas Cook created the first package tour, planting the seed for one of the fastest growing industries – tourism. The steam ship and later the airplane once again revolutionised travel and opened up an entire world. Globalisation, modern technology and Social Media continue to change and shape our world and the way we travel. This also lead to trends, such as ‘Think global, act local’, which plays an important role in the design concept of the Nomad.

As you enter the Nomad you quickly notice that you are not in a conventional hotel. The design is hip and trendy and the staff casual and laid back, without sacrificing service however. The Nomad Design & Lifestyle hotel is a 4-star boutique hotel in the city center of Basel.

Urban unique Double Club Room: This was my room and I loved it!

The hotel features 65 rooms spread over two buildings. Concrete, oak and colourful Kelims, fabrics and patterns dominate the rooms. The style is a mix of minimalism and mid-century. Unlike most hotel rooms, there is lots of loose furniture, such as trolleys, cupboards and table lamps, which creates a home-like feeling. Most of the furniture was custom designed and made for the hotel. The modern interpretations of the Kelim carpets, which are found throughout the hotel make reference to the nomadic lifestyle.

Quirky details: a modern interpretation of the Kelim, here used as upholstery, the globe lamp and colourful towels

The bathroom is fitted out in black mosaic tiles, features a rain shower and colourfully striped towels. The floor to ceiling windows allow for lots of light and make the space look bright and friendly. It is easy to tell that the design of the hotel was a labour of love and you will continuously discover small details that will put a smile on your face. My personal favourite was the globe lamp, because it brought back childhood memories of me spinning the globe with my eyes closed and picking a destination (I admit, I couldn’t help but spend a few moments doing just that).

The Eatery Restaurant & Bar will delight you with true fusion cuisine, allowing your taste buds to travel from the Swiss mountains to Kerala with a stopover in Beirut. The menu keeps changing so you will never get bored, no matter how often you return. I was particularly fond of the Sunday brunch and of course the turquoise wall and chairs!

Just like you’d expect from a modern city hotel you will also find a fully equipped gym to work off some calories and a sauna to enjoy a bit of downtime after a long day of discoveries, business meetings or dealing at a trade fair (a modern form of trading voyages…)!

So whether you are looking for a weekend of leisure, exploring the city of Basel, a fun place to spend the night when doing business in Basel or a casual meal amongst friends, the Nomad should definitely be on your list. As for myself, since I am currently working on several interior design projects in Basel, I will definitely treat myself to their Sunday brunch again sometime soon!

P.S. The Nomad is part of the Krafft Group, which manages the Hotel Krafft, Consum and Voltabräu in Basel as well as the Hotel Greulich in Zurich – each of these establishments highly unique and with their very own concept.

Note: This blog post was created in collaboration with the hotel (press trip)

Clients often ask how they can decorate in a minim

“It’s the details that create the wow!” Lovi

On a cold Sunday, there’s nothing quite like a c

“It’s the details that create the wow!” Styl

Working on a new concept. I love the combination o